When I was a child there was a pub near our home called the “Fox and Elm”. It had an elm tree outside, with a rather unconvincing plastic fox in it. Dutch Elm disease did for the tree, and I never found out what happened to the fox, but both were gone after a few years. But the practice of naming pubs after animals is common. ‘The Swan’ is England’s fifth most popular pub name, while ‘The Fox’ comes in at number 21. (Number 1, if you’re interested, is the ‘Red Lion’). Why this rambling discourse on pub names? Simply because I found out yesterday why there isn’t a pub called ‘The Swan and Fox’.

I had a couple of hours free, and seeing the hail clouds drift away for a while, decided to go out walking while I could.  I stopped off at a decidedly urban canal, intending nothing more than a peaceful walk, until a chance sighting saw me haring back to my car to grab my camera.

The chance sighting was a fox, a beautifully clean, mange-free animal, snoozing in the sun on the manicured lawn of a house whose back garden meets the canal. When it stood, I realised it was a vixen.  She proceeded to follow what was clearly a well-tried route, from back garden to back garden, following the route of the canal. Under fences using well-worn scrapes, over fences with scratched tops. When I couldn’t see her, I could chart her progress by the alarm calls from blackbirds, and the sudden explosions of mallard into the air.

And then I was suddenly aware that the fox wasn’t the only mammal near to me. I’d been so fixated on the fox that I hadn’t realised that just feet away from me, a water vole was swimming along the canal. Britain’s fastest-declining mammal, the water vole is facing an uncertain future thanks to the release of mink, their perfect predator, in the 1970s. The towpath for the canal is heavily used, and this water vole was clearly used to people – indeed, it was so comfortable being around people that as I stood still, it swam right past me, so close that I could almost have touched it. It dived into towards the bank, where it will have one of its many burrows. I walked back to the area where it had come from. Water voles are highly territorial, and usually stick to a home range, so there was a good chance it would return back at some point, and I might get to see it again. And then I realised that, while I’d been fixated on the water vole, I hadn’t noticed the beautiful swan, nesting a hundred yards further along the canal. Should I focus my attention on the water vole, or on the swan? I chose the water vole, because they are much rarer animals and a particular favourite of mine.

That turned out to be the wrong decision. As  I was patiently waiting for a pleasant shot of a water vole swimming back along the canal, all hell broke loose behind me. I turned around just in time to see the nesting swan rear back, and attack something. Its devoted cob thundered across the canal, wings a-blur, to join in. But what were they attacking?

It was the fox. The swan hasn’t actually laid any eggs yet, but doubtless the fox thought that there were eggs or chicks – a nice meal, in other words – in the nest. The swans nested in this same place (on a platform built of sticks on the canal bank)  last year, and raised only one cygnet, losing the rest. The others were almost certainly taken by a fox, and possibly even by this fox.

I didn’t get the picture-of-a-lifetime of the swan attacking the fox, but a few minutes later I did manage to photograph the water vole emerging again from a bankside hole on the other side of the canal. I quickly remind you: this animal is used to people, and was photographed using a long lens. It wasn’t disturbed by the photo. It knew there was someone on the other side of the canal, but it also knew it  was safe. If it had reacted to my presence in any way, I would not have photographed it.

And so  now my challenge is ‘name the pub’. Swan and Fox is clearly a recipe for disaster. Duck and Vole? Fox and Duck? Vole and Swan? Maybe I’ll leave it to the experts. 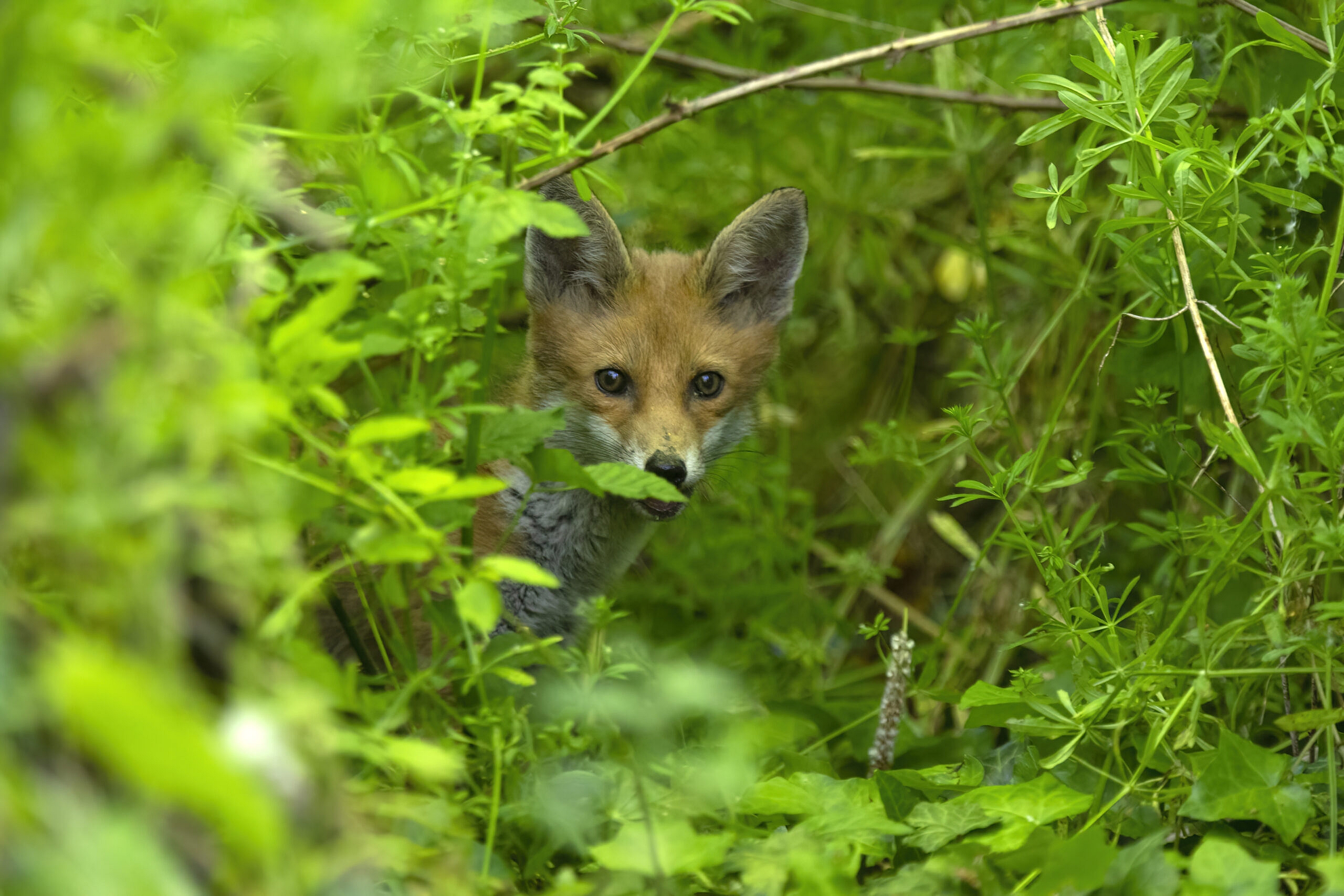 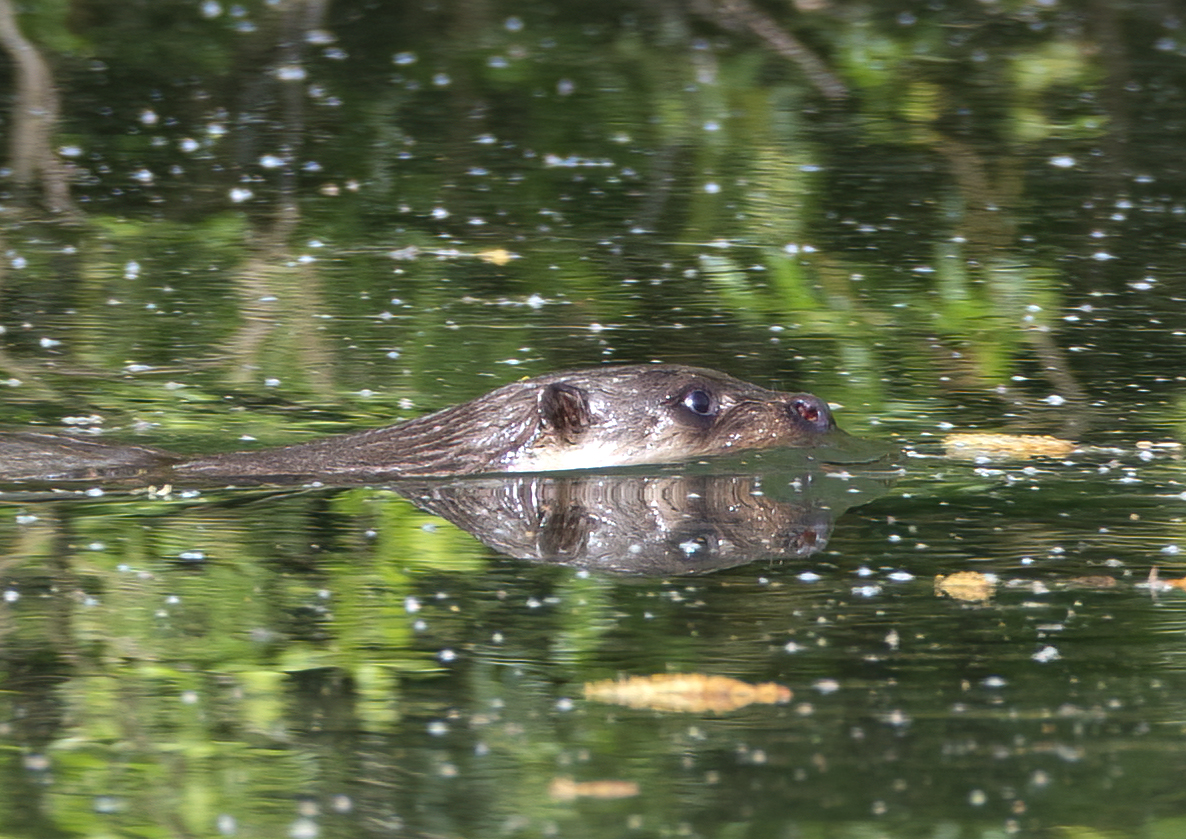