It is definitely supposed to be winter. Christmas is only just past. A couple of years back we were knee-deep in snow on this same week. But the current high temperatures here in the South of the UK mean that some of our wildlife thinks that spring is on the way.  And that can cause some serious problems if the predicted cold snap arrives.

I recently visited Salisbury Plain, in Wiltshire. You’ve probably heard of it as a military training area, which it certainly is, as the far-distant rusted remains of military vehicles used for target practice attest. But while large parts of this enormous site are permanently off-limits to the public, other parts are accessible when the military isn’t actively using them. You might think that being part of a military firing range, and having bombs and tanks and missiles actively exploding around you, would be bad for wildlife, but the opposite is true. Even the peripheral areas of the plain enjoy limited disturbance by people, and while an explosion is certainly bad news for anything caught up in it, the vast majority of the Plain consists of areas which ordnance flies over, rather than lands in.  This means it is a vast space where the wildlife is left largely alone, as long as you can put up with some terrifyingly loud bangs at times. That makes it a good place to go and look for wildlife, but the downside is that Plain is vast. The training area is roughly 25 miles by 10; or 38,000 hectares. To put that into context, it’s about 10% bigger than the Isle of Man or 80% of the area of New York City.  That’s a lot of space to scan with binoculars looking for an interesting bird or mammal.

The clues that nature was a little confused right now started with a corn bunting. It’s a red-list bird, having suffered a decline of more than 89% since the 1970s. Dumpy and rather plain-looking with a high-pitched call, corn buntings are ground-nesters and seed-eaters, which doesn’t co-exist well with our mechanised farming. So the vast, largely untouched grasslands of Salisbury Plain are good for it, and the bird is easily seen there. But this one wasn’t feeding, it was singing, displaying the nutcracker-style structure inside used to break open hard seeds. It was singing because it was serenading another bunting a few fence posts along. This was a bird getting an early start on finding a mate.

A mile or so further around the track, I came across a large mixed flock of starlings and fieldfares. Fieldfare are winter thrushes, spending their summers in Scandinavia and Russia, and migrating here to enjoy Britain’s milder winters – there can be as many as three-quarters of a million visiting here if there is a harsh winter further East. I normally see them raiding trees and bushes for berries, but this group of perhaps fifty was mixed in amongst twice as many starlings, all gleaning an arable field for spilt grains and any unwary worms.  I’ve never seen fieldfares mix like this before, and it was telling that if they got too close to a starling, it would attack them, despite its smaller size. It was an uneasy truce, but in winter many eyes make for safety. 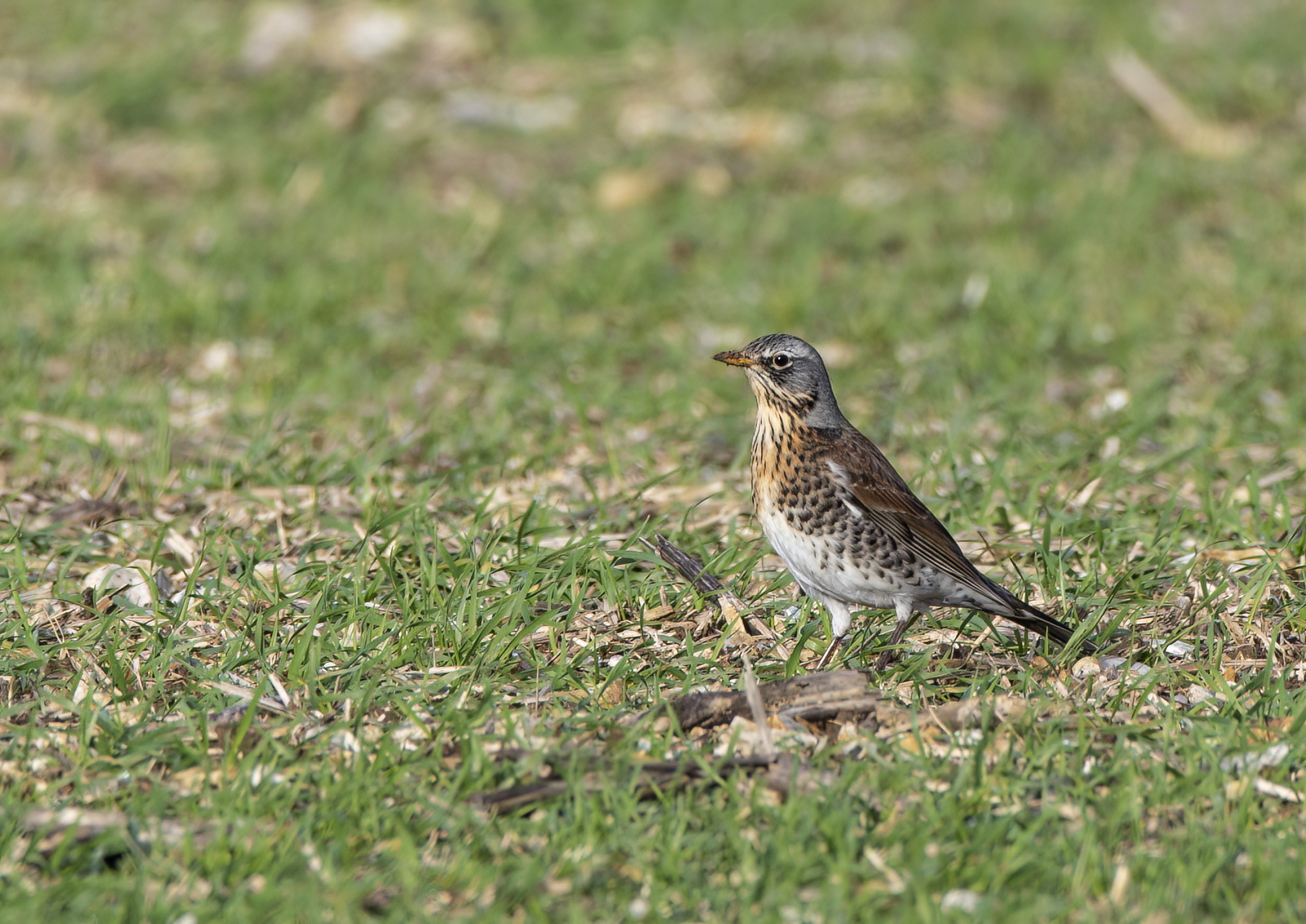 Another mile around, and I came across something I’ve never seen before: a flock of great bustards. If you’ve never heard of great bustards, they are remarkable birds. Think “turkey” and you’ll be in the right area, although bustards are a stripey brown and orange rather than a black colour and substitute an impressive moustache rather than a wattle. They are huge birds, claimed as being the heaviest flying bird on earth, with a weight of up to 21kg (more than a bag of cement) and a wingspan of up to 2.5 metres, slightly bigger than a golden eagle. They are also, unfortunately, eminently edible, so much so that they went extinct in Britain largely thanks to being shot, which makes their current refuge of Salisbury Plain more than a little ironic. The birds I was seeing were from a reintroduction project (You can find out more here ) and they had settled in the middle of a cover crop to dine on the fresh green leaves. Or at least, that was what they were doing at first.

One of the birds seemed to turn itself inside out. It started by raising its tail and splaying its tail feathers. Then it squatted and held its wings out sideways and turned them forwards. While the bustard’s outer feathers are russet orange and chocolate, the under-feathers are mostly a brilliant white.  It tucked its neck down. It became a sort of cotton wool ball. Having made its intentions plain, the bustard did a sort of half-hop, half-flight a couple of feet into the air.

Now for a bustard, this isn’t a sign of disease. This is ‘lekking’ behaviour, a kind of ritualised mating dance. A bit like John Travolta in Grease, the dance was intended to scare off rival males and seduce the females.  The only problem was that bustards lek in March, not the second week in January. Maybe this was a juvenile just rehearsing some moves, but it wasn’t the only bird that did it. Then a passing buzzard called and spooked the entire flock into flight. It was a memorable sight, like a hundred giant-size white feather dusters all flapping their way through the sky together.

Climate scientists expect that over the next fifty years, Britain’s winters will slowly become warmer and wetter, to the point where winter is no longer a distinct season. From what I saw, our wildlife already thinks that’s happening.

1 comments On It’s all kicking off…