This week I watched one of Britain’s unsung superheroes, a miniature marvel: the two-coloured mason bee.

A sunny weekend in May is the best time to see these bees. But you will have to look closely, as mason bees are tiny things, smaller than your little fingernail, topping out at a fraction over a centimetre from nose to tail. The two-coloured mason bee is, as its name subtly implies, two-coloured, with a black head and thorax (front end) and a gingery-orange abdomen (back end).  Shaped like miniature furry barrels, mason bees are what are known as ‘solitary bees’. We’re accustomed to the concept of the bee hive, of bees living in large family groups, but most of Britain’s bees don’t live like that. In fact, Britain only has one species of honeybee, and 25 species of bumblebee. Only the honeybees live in large hives. The bumblebees live in small nests of up to 200 bees, but that’s all. The other 90% – some 201 species – of Britain’s bees live solitary lives.

For a solitary bee, one is the only good number. The females emerge from their nests (more about those in a moment), are mated by males who die shortly afterwards, and then go on to lay their eggs. They live, like our other summer insects, for just a few short weeks, and apart from when they mate, they spend those weeks entirely alone.

What do you do when you’re bored and perhaps even lonely? Why, you get busy. What mason bees lack in friends they make up for in sheer, ceaseless energy. When you only have a few weeks to live, mate and lay your eggs, you don’t hang around. The first thing that the freshly-mated two-colour mason bee does is get cracking on a nest for their young. And that means finding a snail shell.

Two-colour mason bees love snail shells. They can be a little fussy – not just any snail shell will do – but one they have found one they will create food balls of pollen glued together with nectar and lay an egg on top of each one, before sealing it into a cell made of chewed-up leaves or mud. Baby mason bees never get to see either of their parents: they are all orphans before they are born.

But if neither Mum nor Dad is around, how do the tasty mason bee grubs avoiding getting eaten? Well it is here that the female mason bee shows remarkable superpowers. To hide her brood from predators, she disguises the snail shell with bits of old grass. It’s called thatching, but “teepee-ing” might be a better name for it. This careful camouflage is so effective that, even when I knew where a nest was, I’d look away, look back, and struggle to find it again.

But this genius for camouflage is not where the two-coloured mason bee and her fellow mason bees become superheroes. It’s their astonishing strength. Take a look at these next two photos. In the bottom one, I’ve highlighted in red the grass stem that the mason bees is carrying. This tiny little bee is carrying a stem four times her own length – and she’s carrying it in her jaws. That’s like you or I carrying a telegraph pole in our teeth. While flying. Mason bees belong to the taxonomic family ‘Megachilidae’ or ‘large-jaws’, bees like the leafcutter bees equipped with powerful mandibles.

So the nest time you’re out for a walk on a grassy hillside, take a careful look where you’re putting your feet. Because there are superheroes down there 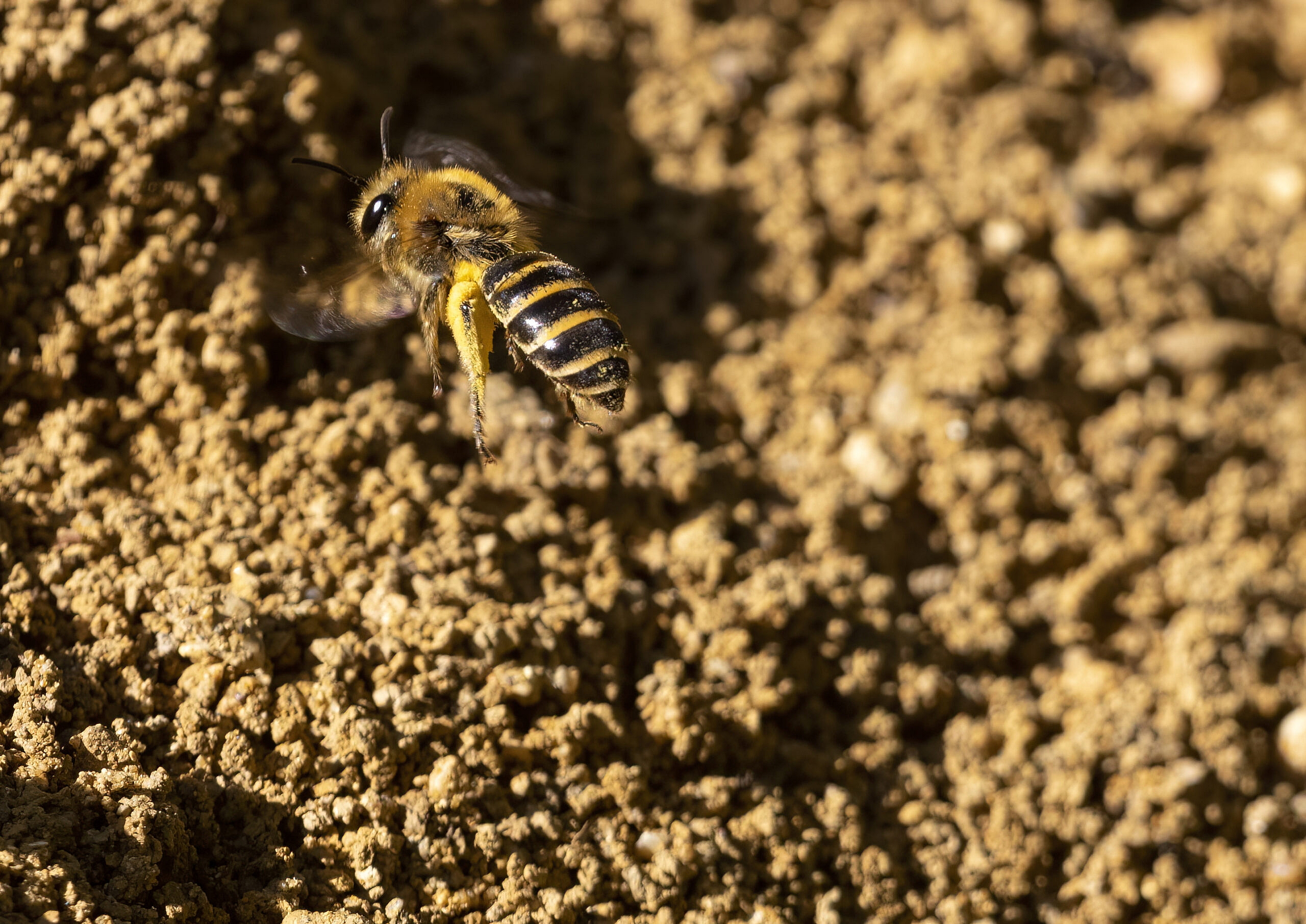